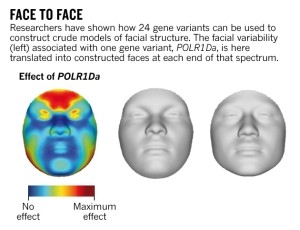 In a new breakthrough, scientists have found the genes used to define facial features in humans. One day leaving a hair or any DNA at a crime scene will be akin to leaving your picture at the scene. We can already use genetic information to predict eye and hair colors. But for the longest time scientist have been working on the construction of the facial features of humans strictly from DNA samples.

Scientists are closing in on being able to create an accurate 3D image of a suspect from only DNA. By making 3D models of 590 people of different origins such as West African and European and comparing their genomes scientists pinpointed 24 single nucleotide polymorphisms that are significantly influential in facial shape and development.

With over 590 high-resolution images used to create a 3D model with over 7,000 data points on the surface of each digital face scientists were able to measure the deviation in the data points based on the nationality of each individual. Characteristics that they measured included flatness of the nose, the wideness of cheekbones, scale of masculinity, and perceived ethnicity.

They then compared the volunteer’s genomes to help identify points at which the DNA varied by a single base which is referred to as SNP. The group of researchers is now trying to integrate more people and genes into their data points. They are also looking to add more traits such as hair texture and sex-specific differences.